Please note that the work described is that of many authors – refer to references and links for credits. 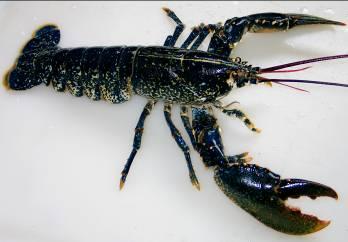 The clawed lobster Homarus gammarus forms an integral part of a complex mixed inshore commercial fishery and the fishing for lobster has provided an essential income for well over a century to many Irish coastal communities. For example Andrews (1847), examined Ireland’s coastal fisheries during the famine and found that there was an excellent supply of lobsters, crabs, oysters and scallops along the Clare and Galway coasts which were not being exploited. Brabazon (1848) reported that traps made of wickerwork or of a wicker frame covered with netting were being used to catch lobsters (Buckland and Walpole 1877). These were called “pots” or “creels”. Later, the Annual Reports of the Inspector of the Irish Fisheries on the Sea and Inland Fisheries of Ireland for the 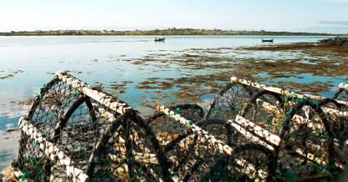 years 1880 to 1885 refer to lobsters and crabs being taken in pots which were of the ink-well type and made of willow.

Even in 1877 pots were regarded as a recent invention and prior to their introduction “hoop” nets were used which required constant attention by fishermen to check if any lobsters were on the net. The substitution of creels for hoops enabled a greater fishing effort, as traps retained the catch and required only occasional attendance of the fishermen. 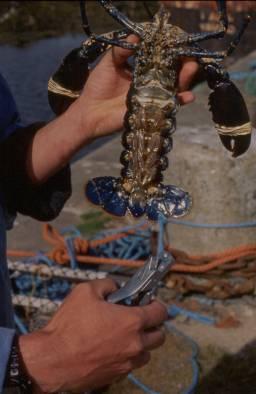 Enlightened management measures are fundamental to any lobster fisheries self-sustainability and should always be the first choice when considering methods for increasing or preserving stock levels. Current Irish lobster fishery regulations include: a) A minimum size for the lobsters landed which is a carapace length of 87 mm. b) Ban on the landing of lobsters that have been “V” notched or have a mutilated tail fan. c) Prohibition of capture of lobsters by SCUBA diving, and d) Licensing of all commercial fishing vessels.

A lobster whose tail fan/uropod which has been “V” notched with punch tool.

The total time taken from when an adult male (cock) and female (hen) lobster mate to the hatching of the eggs which are attached to the pleopods (swimmerets) of a hen may take nine to eleven months. The actual hatching period for the eggs from each individual lobster can last from three to fourteen consecutive days, with larger females producing greater numbers of larvae and taking longer to release all of their larvae. Overall the hatching season for Irish lobsters is prolonged and can start as early as the month of May and finish in September.

When lobster eggs are ripe and hatching starts to occur at night, internal pressure bursts the outer egg membrane, which is sloughed off and the inner membrane then splits. The resultant larvae are swept away by the current produced by the beating pleopods of the hen (mother) lobster. The life stage that is released from the egg envelope at eclosion is the prelarva (or prezoea). Immediately after hatching, the prelarva undergoes a moult resulting in the first larval stage (Stage I) (Factor 1995). The larvae assume a planktonic (free swimming) existence and swim towards the water surface.

Larvae have three free swimming (planktonic) stages, which are thought to be completed in approximately one month in the wild. These successive stages are marked by ecdysis (or moulting of their shell). The three larval stages, sometimes called mysid larvae, are regarded as equivalent to the zoeal stages of other decapods because they use thoracic appendages for locomotion (Gurney 1942; Williamson 1982). 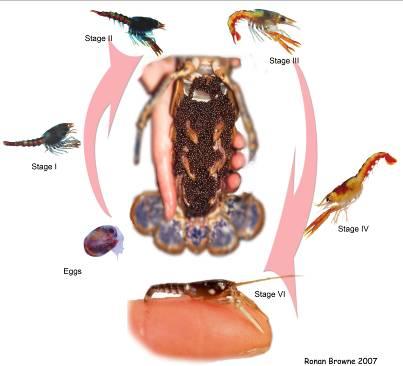 It is believed that most lobster mortality occurs during their free-swimming stages (laravl stages). When lobsters moult into Stage IV, or the postlarval stage they are still strong directional swimmers and they start to explore the seabed for suitable substrate in which to settle and live. Once they have settled to the seabed and moulted to Stage V they are referred to as early benthic phase lobsters. To date around the coats of Ireland we have not been able to locate these early settled lobster despite considerable searching (see the LEAR project).

It is thought that lobsters take five to seven years to grow to the current legal minimum size of 87mm carapace length (CL) after hatching from an egg.

A diagram of the early life stages of clawed lobster (fundamentally during its early life each time a lobster sheds it’s shell or moults it advances a stage).

As there is a high demand and high unit price for the European lobster (Homarus gammarus) they have attracted much attention for aquaculture and stock enhancement purposes. To the authors knowledge there has not been a commercially successful company rearing lobsters from larvae to commercial size lobsters greater than the minimum European landing size of 87 mm carapace length. However there have been efforts made to achieve this goal and to grow lobsters to prawn size for consumption.

There have also been significant investigations since the late 1880′s placed into stock enhancement programs (the release of larvae and postlarval lobsters into the wild in an effort to augment natural stocks). Over this time there have been noteworthy improvements in our ability to understand and meet the requirements for rearing and releasing lobsters. Advances have also been made in understanding the ecology of the North American clawed lobster Homarus americanus and to a lesser extent our European lobster. However more work is required to prove the efficacy of releasing hatchery reared lobster into the wild.

Here in Ireland the Marine Institute have been involved in collaborative work with research partners from Norway and Galicia under the auspices of an Aquareg (INTERREG IIIC) project to investigate novel methods of culturing lobsters for stock enhancement purposes.  As part of this work investigations have been undertaken to examine cost effective methodologies for rearing postlarval (free swimming) lobsters in seacages. This methodology of ongrowing provides protection to the young lobsters from predators while they live on naturally occurring plankton and organisms that foul or encrust the walls of cages that they live in.  An additional advantage to this culture method is that the cages require very little maintenance thereby reducing labour costs. As with other aspects of lobster culture this technique requires vigorous assessment of its viability (with particular emphasis on survival and economics) before up scaling is considered.

Lobster grown in seacage and graph of growth over three years 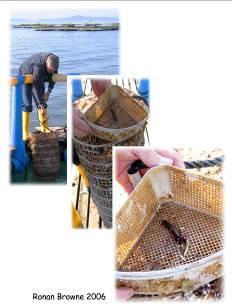 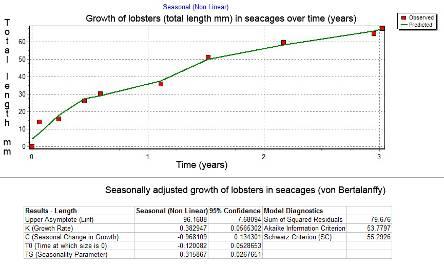 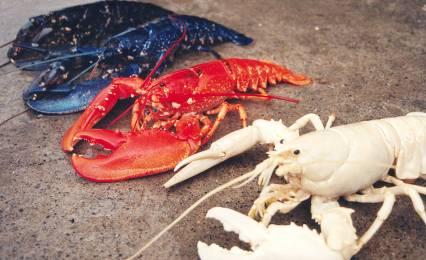 Live clawed lobsters around Ireland are usually a dark blue/black colour and they turn red when cooked. However, there are a number of colour variations landed each year some of which have a genetic basis (colourmorphs). For example over a five year period (between the years 1993 to 1997) 8 “electric” blue, 7 red, and 4 white lobster were reported or brought to the Shellfish Research Laboratory (NUIG). By using the national annual fishery landing estimates a crude guesstimate of natural occurrence of these colour variants are 1 in 566,000 lobsters, 1 in 647,000 lobsters and 1 in 1,132,000 lobsters respectively.

A selection of the colourmorph lobsters kindly donated by fishermen to the Shellfish Research Laboratory in the 1990′s. A typical coloured lobster can be seen on the left hand side of the picture.